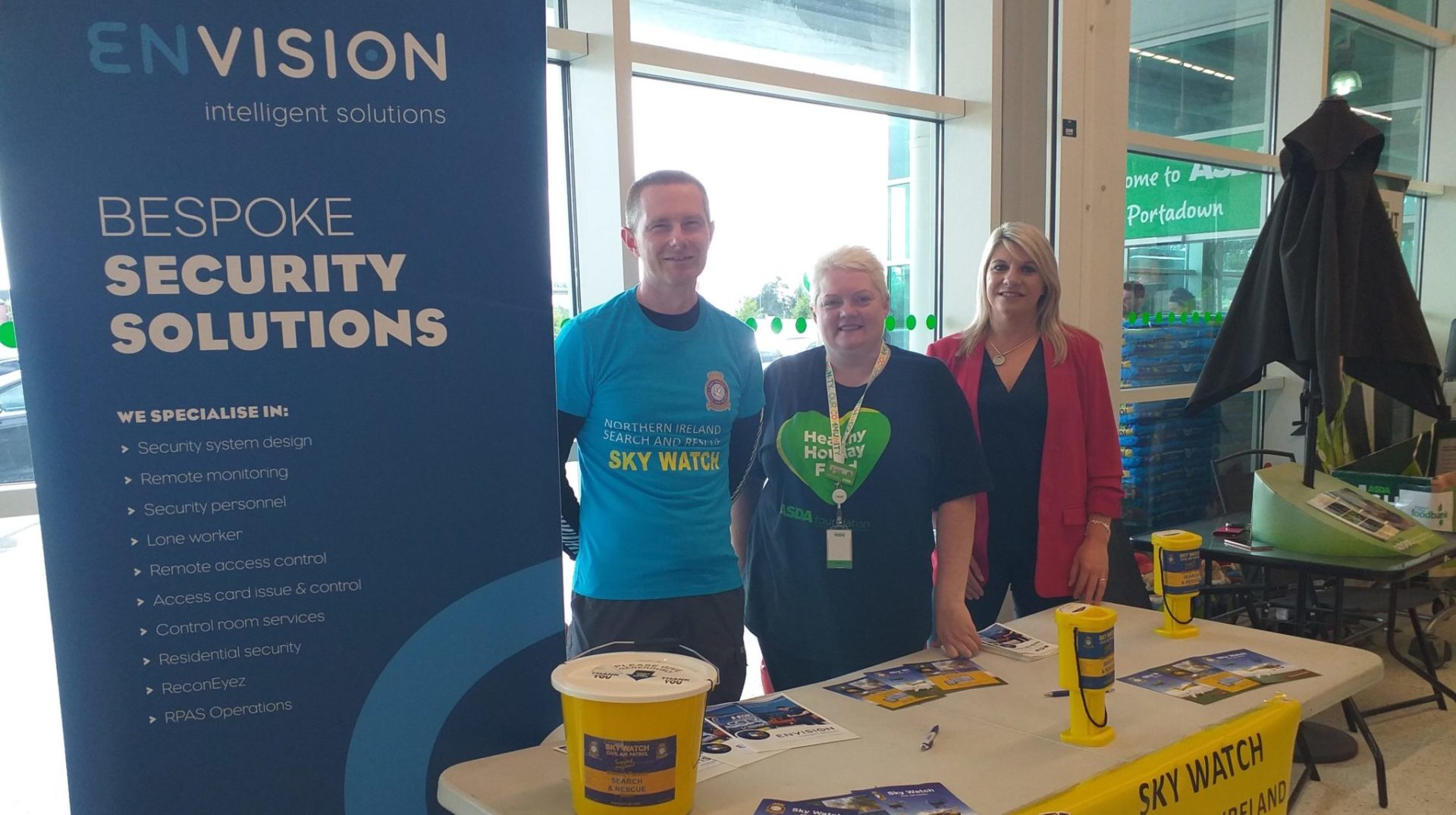 Philip  joined Envision Intelligent Solutions a year ago and we are proud to have him as a member of our team.

Not only is Phillip a great asset to the Envision security team, he is also a valuable asset to the community.

Over the last few years Philip has raised money for Tiny Life, The rainbow trust, look and Mencap by participating in the following marathons:

“This year, as it’s my first year at Envision, I will be raising money for our friends at Skywatch : Northern Ireland Search and rescue.” – Philip, Envision Team member

Skywatch are an airbourne observation charity operating UK wide for over 10 years.

Skywatch also assist the Northern Ireland fire and rescue service by attending fires where they are in need of extra protection, to observe and report.

They carry out searches for vulnerable, missing individuals through aviation methods. These people could be lost children, people with Alzheimer’s or individuals at risk from committing suicide.

Funds raised for Skywatch benefit people locally in Northern Ireland and they rely solely on volunteers.

Preparing for the Marathon

How will Philip Train for the Marathon?

Philip plans to train for the marathon by participating in the following runs:

“In the past, I have had great success holding fundraising days at local supermarkets. “ says Philip.

Philip plans to take the same approach to his fundraising this year, but he is not alone, he will have full support from our Envision family.

The first store to support him was Brownstown P & G based in Portadown, this was hosted by store managers Nathan and Lynn (pictured above).

Philip will be returning to this store to continuing raising funds before the fundraising end date in April.

On the 16th August, Philip was joined by our commercial director Amanda Campbell for a fundraising day in ASDA ( Portadown). This event was hosted by their community champion Elaine (pictured left).

Philip will also be fundraising in Tesco (Craigavon) on Christmas Eve. He will be fundraising from 10am -2pm – If you are around the area, pop in a say hello! This event will be hosted by Tesco’s community champion Marian.

“Philip, Graeme and Amanda are all backing this fundraising effort and it’s great having their support.” – Philip, Envision team member

A successful but chilly day in the Portadown Tesco. Philip was helped today by Customer Services Manager Fiona Doherty.

T: +44 28 3834 7055
E: info@envision-is.co.uk
We use cookies on our website to give you the most relevant experience by remembering your preferences and repeat visits. By clicking “Accept All”, you consent to the use of ALL the cookies. However, you may visit "Cookie Settings" to provide a controlled consent.
Cookie SettingsAccept All
Manage consent

This website uses cookies to improve your experience while you navigate through the website. Out of these, the cookies that are categorized as necessary are stored on your browser as they are essential for the working of basic functionalities of the website. We also use third-party cookies that help us analyze and understand how you use this website. These cookies will be stored in your browser only with your consent. You also have the option to opt-out of these cookies. But opting out of some of these cookies may affect your browsing experience.
Necessary Always Enabled

Performance cookies are used to understand and analyze the key performance indexes of the website which helps in delivering a better user experience for the visitors.

Analytical cookies are used to understand how visitors interact with the website. These cookies help provide information on metrics the number of visitors, bounce rate, traffic source, etc.

Advertisement cookies are used to provide visitors with relevant ads and marketing campaigns. These cookies track visitors across websites and collect information to provide customized ads.

Other uncategorized cookies are those that are being analyzed and have not been classified into a category as yet.